“The mountains are calling and I must go,” said John Muir, the famous Naturalist who wrote the magazine articles that led to the creation of Yosemite National Park in 1890. He knew where one of the best places on earth is and you will too when you discover Yosemite with Weekend Roadtrips.

Yosemite is amazing. Within 1,200 square miles of protected National Park, Yosemite’s beauty is unforgettable and its surreal landscape is breathtaking.  It holds so many incredible aspects of nature that you don’t want to miss: Yosemite Valley, waterfalls, rivers, amazing granite landscapes, meadows and forests, including the famous Giant Sequoia Redwoods.

Leaving from Davis, California, we enter Yosemite in less than 3.5 hours.  Many of the Tour Groups that depart from Davis do not go directly to Yosemite. Instead, they pick up more travelers in other cities which takes the tour busses out of the way from Yosemite and increases the travel time. These other tours require travelers to rent a hotel for one night in Yosemite Village to make up for lost time in Yosemite. They end up seeing only the sights that could have been visited on a one-day trip. Weekend Roadtrips offers smaller group tours that give the traveler time to do more sightseeing.  We have a plan for the entire day. Summertime in Yosemite attracts many people, but our tour plan avoids the crowds.

On your Yosemite day trip adventure with Weekend Roadtrips, you will experience:

The reviews and feedback we get on our Yosemite day trip are the best of the best.  Yosemite is spectacular! Put it on your bucket list and let Weekend Roadtrips guide your fun-filled journey.

Be sure to bring water, sunscreen, snacks and comfortable shoes (walking/hiking shoes). We will inform you of any additional items needed on your specific trip - when you sign-up.
Notify us 48 hours (2 days) prior to trip departure to cancel for a full credit to a future trip. Unfortunately without 48 hours cancellation notice there is no refund.
Our trips require a minimum of 4 people. So far we have not had to cancel any trips. If a trip is cancelled due to a lack of demand you will receive a full refund. Likewise if weather cancels a trip your will receive a full refund.
We do a lot of walking on our trips. Yosemite and Lake Tahoe have optional hikes that are classified as strenuous. Yes you should be in good health and good shape. If you have concerns please consult your physician prior to booking any trips.
We utilize a variety of vehicles from 15 passenger vans to SUV's to the option of larger vehicles as needed.
Food is not provided unless detailed in the specific trip write-up. Food can be purchased. Save time and money by bringing your food. We have an ice chest to store your food.

Great tour, James! Yosemite Valley is stunningly beautiful! The beautiful photo spots that you have showed and the hikes..they’re really worth the efforts with such a reasonable price! Thanks and looking forward to our next trip to SF!

I joined tours of Yosemite, San Francisco and Lake Tahoe. It was well organized and James took us to many famous tourist attractions. The fee was quite cheap compared with the other tours. You can be picked up / dropped off at your hostfamily's house. I highly recommend this nice tour.

We were very lucky with our Yosemite trip: Government shutdown = almost no people at the park and clear skies. James was an excellent driver and tour guide, so overall, we had a very enjoyable trip!

Get directions to Yosemite National Park 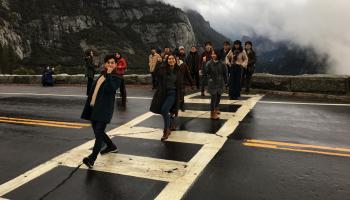 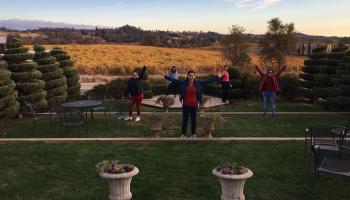 All ages welcome. Must be 21 and bring passport / US Drivers license to sample wine. 40 amazing wineries in and around Amador County! Includes free tour - some wineries charge to drink. Many wineries still pour free wine! We like the free wine! Beautiful landscapes, gardens, hills and wineries. Friendly people! We will also visit several Old Gold Rush towns! A great trip! How many wineries can we see this time?

Our trip starts in Old Sacramento – the Wild West! Lot’s to see including the Sacramento River, Sacramento River Cats Stadium, historic buildings, Museums and shopping. From there we head over to the Capital and explore the grounds. Close by is one of the hippest areas of Sacramento – Midtown! It’s a fun festive environment with many great restaurants, coffee houses and pubs. In Midtown, you will see how people live in Sacramento – they live well! 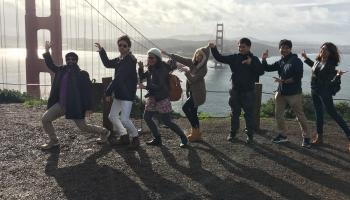 Our tour starts at the astounding Golden Gate Bridge! From there we explore the Marin Headlands and the scenic beauty of San Francisco! Yoda (Star Wars), the Visitor Center, Museums, the oldest building in San Francisco and Disney await at the Presidio! Soon it's time for lunch. The next portion of your trip is free time (3-4 hours) to explore Fisherman's Wharf and the adjoining districts! Your tour will resume with an evening exploration of the Mission District and a view of San Francisco from Twin Peaks!